BANDUNG, itb.ac.id - The national development can be attended from several important aspects, including the sophistication of the technology and the number of entrepreneur, owned by the nation. Combination of them is called technopreneur. Indonesia with the potential of great human resources course can produce new quality technopreneur generation in great quantity anyway. In order to accounting the potentiality, Business and Management School (SBM) ITB cooperate PT Kibar Kreasi Indonesia  again held an event at the same time as the final project assessment of course Tech-Based Business (TBB) on Friday (13/05/16) in the Aula Timur ITB.

The event is open to the ITB academician is composed of 3 sessions that opened with a foreword and presentation of Dr. H. Sudrajad Dudi Abdurachim, M.T. as the Head Office of KUMKM in West Java. The first session in the form of a panel discussion themed "Enhancing Ecosystem for Techonopreneurship" with invited speakers include Dudi, Puja Pramudya (co-founder & Director of Technology of Radyalabs), Wawan Dhewanto, Ph.D who is Chairman of the Entrepreneurial Studies Program-SBM ITB and Dimas Satrio (Community Leader, FOWAB). The discussion deals with the development of the technopreneurship in Indonesia managed to attract the attention of attendees at the event. 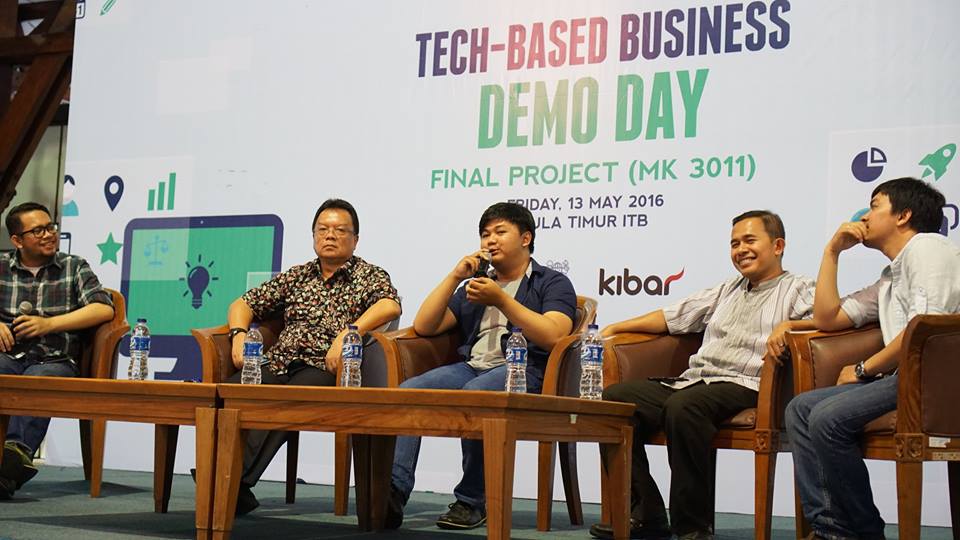 The second session, namely pitching from TBB participants that already divided into several groups. In this session, each group presented the work of company stub (start-up) of each group. Ranging from background to target achievement of the start-up, all described in detail. At the end of the presentation, attendees were given the opportunity to make comments and questions on each group. The third session continued in the form of session sharing with invited two speakers, namely, M. Sena Luphdika (co-founder of Meridian.id) as the first batch of  TBB alumni, Gilang Agustiar (Co-founder of Metagraf) as the second batch of  TBB alumni. Both speakers have ITB students hope that collaborate in producing a work because engineering can not stand on its own.

At the end of the event, the organizers announced the winners of the pitching sessions. As for the seventh start-up that is Berorganik, Mupuk, Preve, Towa, Mlaku, Charenji and Tutti. With the competitiontight enough and the assessment is not easy, the committee finally get two winners in the category of The Most Favorite start-up that fell to Tutti which presents an application to assist the local musicians in order to get the chance to connect with other musicians and promoting himself. Judges Choice award category given to the Berorganik produced works in the form of applications to find producers of organic products in the form of catalog. Although only two winners, the seven start-up works of ITB students  has managed to amaze the visitors of the event with a brilliant idea and a strong desire in advancing the nation of Indonesia.