FITB Talks: A Day to Get to Know FITB 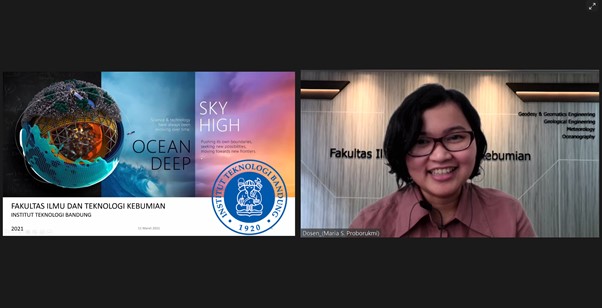 BANDUNG, itb.ac.id-- FITB Talks, a virtual event that was held on Thursday (11/3/2021) by Ministry of Extraterrestrial Cabinet Bentala FITB 2020, is aimed to introduce the Faculty of Earth Sciences and Technology (FITB) to High School Students all over Indonesia.

"FITB is the only faculty that focuses on studying the earth system in a multidisciplinary manner which includes Geological Engineering, Geodesy and Geomatics Engineering, Oceanography, and Meteorology," said Dr. Irwan Meilano, S.T., M.Sc., the Dean of FITB, in his opening remark.

Afterwards, Dr.rer.nat. Maria Sekar Proborukmi, S.T., M.Sc., explained further regarding the history of FITB, vision and mission of FITB, study programs in FITB, the facilities and the accreditation of each study program in FITB, as well as the pathways to get into ITB.
Furthermore, there was a talk show session with the alumnus of Meteorology 2010, Prima Mangesthy Hati Maria, who is currently working in the field of renewable energy sources, especially wind and solar power.

She said that the journey of her career is also partially influenced by the network that she built during studying in ITB. "Make the most of your time at ITB, other than studying, try to actively participate in student organizations to widen our network. The association of ITB alumni is strongly helpful, " she explained.

Her four years adventurous journey in FITB, especially the field research, has successfully equipped her with adequate soft skills, hard skills, and a strong mentality to climb to her career today.

At the end of the talk show, Prima Mangesthy Hati Maria, who’s also a graduate of the University of Birmingham, advised the audience about the importance of collaboration with faculty colleagues instead of competing to achieve an aimed study program.
As the last agenda, there was a talk show with the representative of each Majoring Student Association (HMJ), namely M. Faiz Azka Siregar (Geological Engineering '18), Miqdad Fadhil Muhammad (Geodesy and Geomatics Engineering '17), Meilian Auranda Br Siregar (Meteorology ' 18) and Aulia Salsabella (Oceanography '17), as guest speakers.

They shared further about their experiences in respective majors, such as their journeys in Joint Preparation Stage (TPB) to eventually being a student of their dream study program, and they also explained the uniqueness of each study program, as well as its prospective jobs to 68 audiences who were actively engaged in this session.

"In the future, the study program that we choose will gradually shape our mindset, so please be attentive and considerate about it. Pandemic is not a limitation, let’s keep the spark to achieve our dreams," concluded Miqdad at the end of the session.

ITB Professor's Scientific Speech: Participation of Geochemical Science is a Must in Oil and Gas Exploration in Indonesia